Which ear is the gay earring?

You might recall hearing that if a man wore an earring on the right ear, that meant he was gay. The term “gay ear” was often used. Around the 1960s, people began to catch on that a right-ear earring was effectively a code for being gay. At the same time, the left ear is straight.

As time went on, earrings as a whole became more popular, and even some straight men opted to pierce their right ear. It soon became clear that the “gay ear” was no longer a reliable way to tell if a man was gay or not.

The “gay earring” fad lasted until the 1990s. But wearing an earring on the right ear is still a popular choice. And as ear piercings on both men and women are becoming more mainstream, more men than ever are opting to get their ears pierced.

A brief history of the gay earring 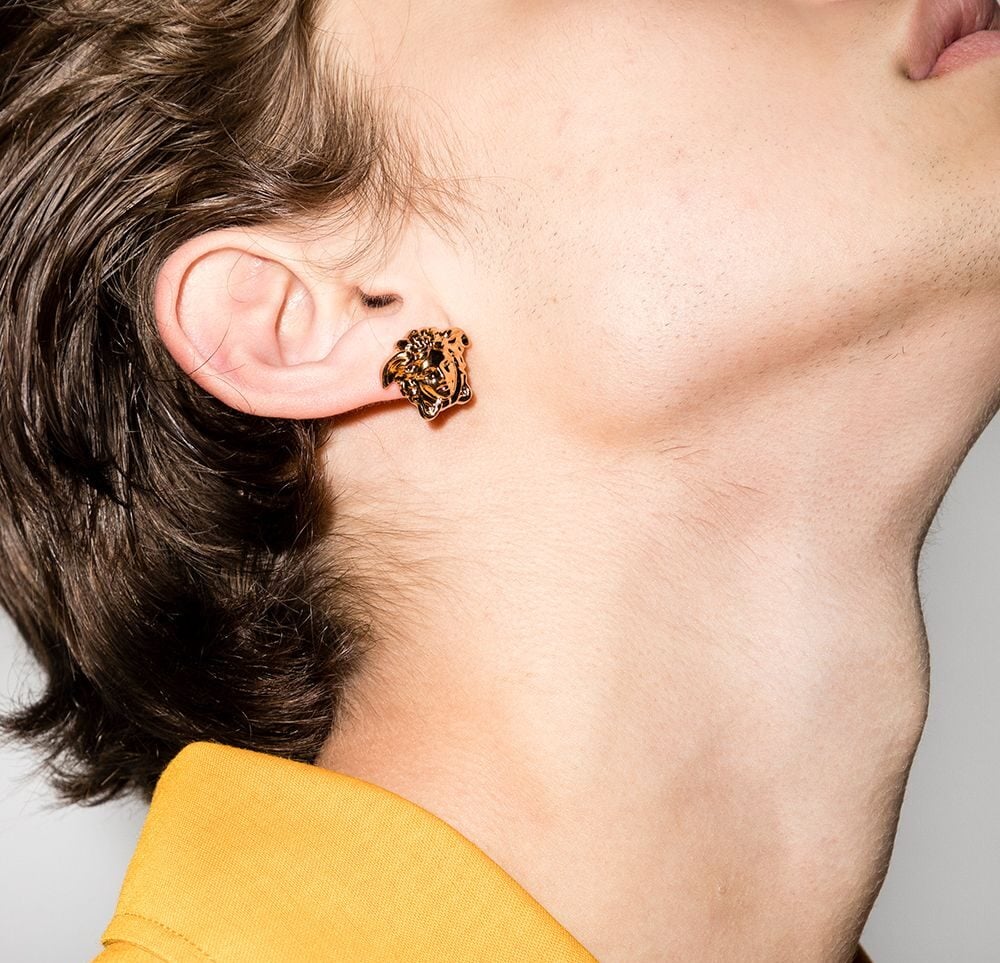 Now you know a little bit about the gay ear. But you might wonder how a right-ear piercing came to be a kind of code.

The truth is that gay men weren’t the first men to start wearing earrings. Sailors frequently wore earrings, believing they would serve as protection against drowning at sea.

It’s not quite clear how the earring became adopted by the gay community as a code. It may have something to do with the fact that wearing earrings went against most people’s concept of traditional masculinity. Since being gay was already seen as non-traditional, using earrings seemed like a logical choice.

By the late 1960s, wearing an earring in the right ear was a pretty clear sign that a man was gay. Over time, it became a kind of open secret that more and more non-gay people were becoming aware of.

But during the 1990s, ear piercings became more associated with general rebellion and punk rock culture. With people of all sexual orientations having one or both ears, it became impossible to use an earring to tell if a man was gay.

The “gay ear” fad thus largely died out. But it hasn’t disappeared entirely — you can find plenty of forum posts online from men asking which is the gay ear before getting a piercing!

The “gay earring” wasn’t the only thing used for signaling that one was gay, although it’s probably the most famous one.

Should you get a gay earring? 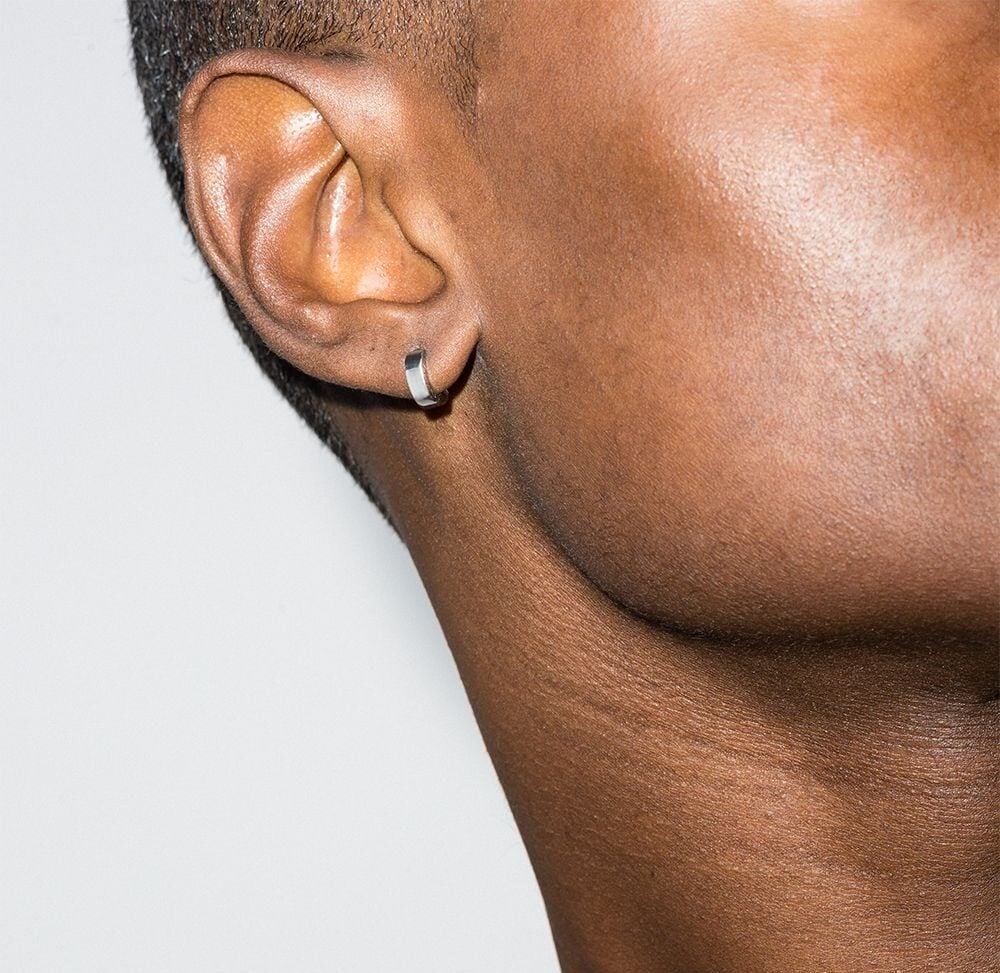 Now that piercings have become much more mainstream, getting a piercing in the “gay ear” isn’t the clear indicator that it once was. Men of all sexual orientations now have pierced ears, and not everyone follows (or knows about) the history of the right ear as the “gay ear.”

That said, if you’re gay, getting a right-ear piercing can be a kind of homage to the history of using a gay earring for signaling. But you also shouldn’t feel like you can only have your right ear pierced — there’s nothing wrong with piercing the left ear if you think that looks better!

Likewise, if you aren’t gay, there’s nothing wrong with piercing either your right or left ear. Essentially, since so many people have piercings now, ear piercings aren’t the reliable indicator of sexual orientation that they once were. But thankfully, they’re still a great vehicle for self-expression.

Just like with getting any piercing, there’s some important preparation to do before getting a pierced ear. First, choose a reputable piercer. Ear piercings aren’t quite as likely to get infected as other piercing types, but infection is still something you want to avoid!

A reputable piercer will have good sanitation practices, and they also are more likely to do a decent job of positioning the piercing on your earlobe. Once you find a good piercing shop, you can make an appointment.

Part of preparing for a piercing of course involves looking at cost. On average, getting a single ear pierced will cost between $20 and $50, although very high-end piercers may charge more. Often, this price includes a starter stud. If it doesn’t, there’s no need to worry — there are plenty of hypoallergenic starter studs out there for less than $10.

It’s also a good idea to think about the kind of jewelry you want before getting your ear pierced. With a first piercing, your piercer will use a “starter stud.” The earring will be in place for over a month, so make sure to choose something you like!

Make sure that you’re well-rested, hydrated, and have eaten a good meal before your piercing. Especially if you’re nervous, that can help your appointment go a lot more smoothly!

As for healing, most ear piercings heal completely in about six weeks. Make sure to follow your piercer’s aftercare instructions. Ear-piercing aftercare isn’t too complicated; it mostly focuses on keeping the piercing clean. Further down, we go into more detail on how to care for your piercing as it heals.

How to choose gay earrings?

Often, starter studs used for first-time piercings will be fairly straightforward when it comes to style. But once your piercing has healed, there’s a whole world of exciting earring types out there!

Here are the three main types of earrings (along with their pros and cons): Studs – As you probably know, a stud is an earring with a straight post. But you can put just about any design on the end of the post! Square-shaped studs are popular earrings for men, as are more traditional single stones.

On the plus side, stud earrings come in a huge range of designs. They are also subtle enough for work or formal occasions. The main downside is that they can be uncomfortable to sleep in! One of the bigger advantages of hoops is the fact that they can lie flat as you sleep. A potential con is their somewhat casual look — depending on the situations you usually find yourself in, hoop earrings may not be viewed as appropriate. An introduction to Aquarius birthstones and their properties, meanings and powers

Dangles – This is a pretty uncommon look. But if you’re a confident guy, wearing a single dangling earring is a great way to make a statement. That’s one of the main advantages of this earring type, especially if you’re after a bold look.

Most experienced piercers recommend that you start out with studs. A straight-bar piercing tends to heal faster than one with curved jewelry. Studs also are less likely to get caught on clothing, and they’re easily the most versatile earring type on the list.

Likewise, there are plenty of materials out there for earrings. Do your best to avoid nickel and nickel alloys, as these can cause skin reactions in some people. Here are some of the most common high-quality materials:

Surgical steel – Surgical-grade steel is a great metal choice; it’s body-safe, looks great, and is affordable, too! Since surgical steel earrings are made from the same type of steel used in surgical devices, they are safe even for people who have very sensitive skin. However, some people prefer to seek out more glamorous-sounding metals.

Titanium – Titanium is an element that, like surgical steel, can be used for medical devices. Of all metals, it is the least likely to cause a reaction. The only real downside is that it isn’t quite as common as some of the other metals on the list.

Gold – Gold is a great material for earrings, but not by itself — 100% gold is too soft and often too expensive. As a result, it’s usually used in alloy form with stronger metals. Look for jewelry with a higher proportion of gold (higher karat value), as these earrings will be less likely to irritate your skin.

Silver – Silver is a great choice of fine metal for earrings. It is hypoallergenic, and the silver color will not wear off as it does with some cheaper earrings made with coated metals. However, like gold, it has the potential downside of being expensive.

Once you’ve eliminated potentially dangerous materials like nickel, choosing the right earring material really comes down to personal preference. But stainless steel is ideal for those new to piercing. It’s safe and affordable, and you can find surgical steel studs in just about any design you can imagine.

How to care for your piercing?

As you might already know, one of the advantages of an ear piercing (whether it’s on the “gay ear” or not) is that it’s very easy to care for compared to most other piercing types. But when you’ve just gotten a piercing, there are some important steps to take to make sure it heals nicely and doesn’t get infected.

First, make sure that you wash your hands before touching the piercing, as this will help cut down on the number of bacteria it’s exposed to. You’ll also want to wash the piercing at least once per day with soap and water — this is easy to do in the shower or bath.

Twice a day, use a cotton ball and rubbing alcohol to clean around the piercing. This can help to kill germs. If you want, you can apply some petroleum jelly. That will help soothe the area and also works as a protective barrier.

If you’ve considered going for a gay earring (or really, any ear piercing at all), we hope that you now have the information you need to choose the right jewelry and piercing type. Be sure to take good care of the piercing as it heals, and you’ll be well on your way to opening up a new world of fashion opportunities.

Nose piercing: Everything that you need to know

Everything about the obsidian stone: Meanings, colors, properties, jewelry and uses

The best men’s pearl necklaces to make you look handsome