Keep reading to learn more about this gorgeous stone and find the perfect gift for loved ones.

The tourmaline stone is a borosilicate crystal that has a very complex composition, and is available in a wide variety of colors. It is one of the October birthstones, meaning joy, positive energy, charm and self confidence.

“What is my birthstone” is a common internet search. The list of birthstones by month was officially composed by the Jewelers of America in 1912. If you are born on October or you are a Libra, you’re in luck: you might be drawn to this beautiful stone, “the rainbow that fell into the earth”, as it is one of the October birthstones, the other being opal. 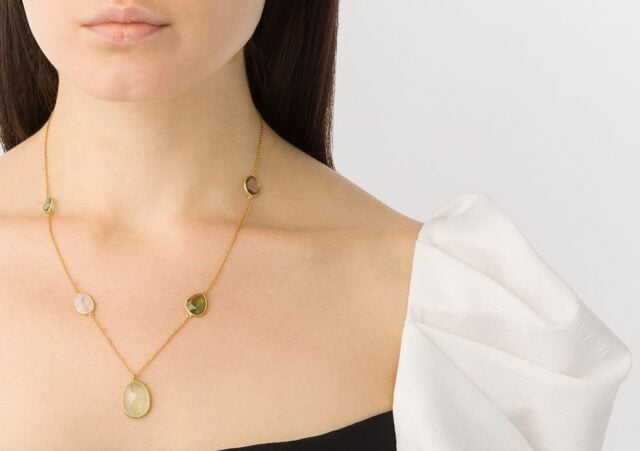 Legend has it that if we can find the landing point of a rainbow, we will achieve eternal happiness and wealth.

In 1500, a Portuguese exploration team discovered a gem in Brazil that glowed with colorful rainbow lights. This gem, hidden at the foot of the rainbow that day, was therefore called tourmaline by future generations, also known as “the rainbow that fell into the earth”.

At present, tourmaline together with ruby, sapphire, aquamarine, tanzanite, emerald, is classified as precious gemstones, which is deeply loved by the public for its amazing colors, beautiful meanings and powerful healing properties and has huge market values.

Tourmaline is derived from the ancient Sinhalese word Turmali, which means “a mixed stone”, due to its complex composition and variety of colors.

Indeed, Tourmaline is a borosilicate crystal containing chemical elements such as aluminum, iron, magnesium, sodium, lithium and potassium, which gives it a wide variety of colors. With a hardness of 7-8 and density of 3.06, it is suitable to be gemstones.

In terms of structure, there exist often visible vertical growth lines on the outside of tourmaline, and gas-liquid inclusions and cracks on the inside, which is normal and the true nature of tourmaline. 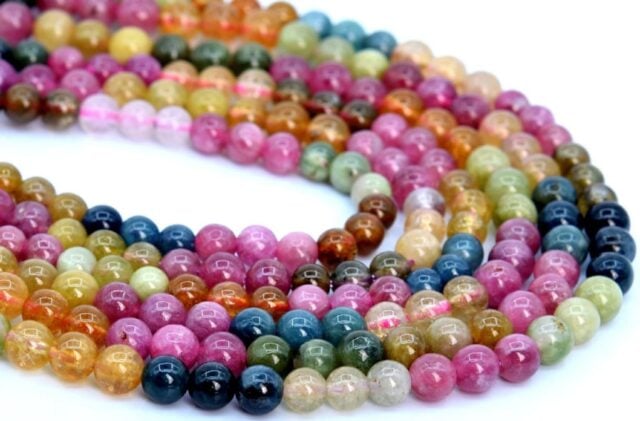 What color is tourmaline? Tourmalines have the most abundant colors among all kinds of gems. Thanks to its complex composition, chemical formula being Na(Mg,Fe,Mn,Li,Al)3Al6[Si6O18][BO3]3(OH,F)4, among which iron, magnesium, lithium, manganese, aluminum and other elements can be replaced with one another, the combination and quantity of each ion directly affect the color of the tourmaline stone.

The international jewelry community basically classifies tourmaline stones into different varieties by color; and the more intense the color, the higher the value.

In addition to its wide range of colors, tourmaline is well known for its color-change effect. When held against the light, the hues and shades of the tourmaline change depending on the angle of observation. This is due to the strong polychromatic nature of the tourmaline stone, which gives it a mysterious touch.

The cat’s eye refers to a distinct band of light on the surface of the tourmaline that changes when viewed from different angles. This is because the inclusions within tourmaline crystals are often directionally distributed and form tubular inclusions, resulting in the cat’s eye effect in curved or bead-shaped tourmaline stones.

The energy contained in this stone has a calming effect, which helps us focus. In addition, those changeable colors inspire ideas and creativity and encourage us to do our best.

Tourmaline can also emit a magnetic field with great affinity, which can eliminate the indifference among individuals, and therefore have a natural attracting effect regarding love and friendship. At the same time, people wearing tourmaline jewelry can release more charm and become more attractive.

In addition to the above effects, red and green tourmaline stones also have the meaning of accumulating wealth and riches. In the meantime, since the color of the red tourmaline is close to the blood, it is believed that the red tourmaline also has a positive effect on blood circulation and the treatment of dizziness and anemia.

Tourmaline comes in a wide variety of colors. Black tourmaline is the most common of these varieties, dark to pure black, opaque, and similar in physical properties to other types. Since it is produced in large quantities, has affordable prices and strong healing properties, black tourmaline is very popular in the market.

Black tourmalines are said to help effectively eliminate stress, fatigue, turbidity and improve physical health and luck. For those who are easily frightened and have nightmares during sleep at night, placing a black tourmaline aids to stabilize the space energy field and to dispel evil. Patients wearing black tourmalines can avoid external interference, concentrate on healing, and increase the speed of recovery. 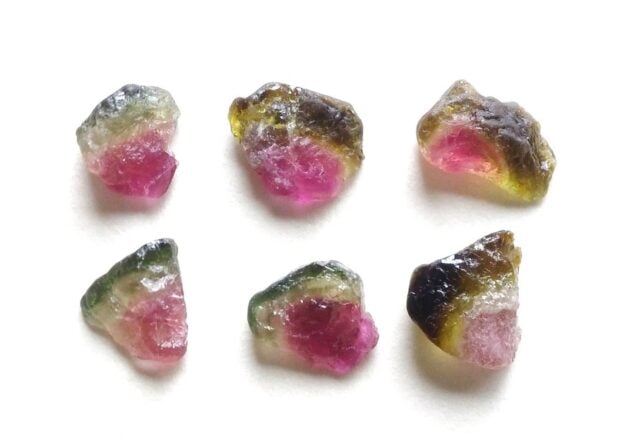 A general term for tourmalines that present multiple colors, usually red and green, commonly known as the “watermelon tourmaline”. They are currently very popular with collectors and consumers.

Watermelon tourmaline can promote blood circulation, revitalize cells and is good for women.

In terms of emotional healing properties, watermelon tourmaline is able to bring us positive energy, eliminate negative thoughts and emotions, thus making us happy and relaxed. It also helps to relieve tensions among friends or family and improve interpersonal relationships.

A general term for pink to red tourmaline stones. Best colors in this collection are fuchsia and rose. However, in nature the hue changes greatly.

Pink tourmaline is common on the market, ranging in color from light pink to deep pink. With such a gentle and pleasing color, the pink tourmaline meaning is associated with emotions and relationships. It is said that wearing pink tourmaline can make us easier to get along with, thus improving interpersonal relationships and enhancing our popularity, as well as attracting romance.

4. Blue tourmaline or Indicolite including the Paraiba tourmaline

A general term for light blue to dark blue tourmaline. Blue tourmalines are rare, and now they have become the most valuable type of tourmalines. They are produced in yellow clays from weathered granites in Siberia, Russia, and also in Brazil, Madagascar, and the United States.

The blue tourmaline symbolizes the clearness, purity, tranquility and freedom of the ocean and the blue sky, making us feel detached and far away from the crowd.

It also has the characteristics of quietness and reasoning, which is the opposite of the red tourmaline. In the business world, the blue tourmaline is thought to imply balance.

The most famous of all blue tourmalines is the Paraiba tourmaline with a blue-green shade, which is colored mainly by copper. This gemstone was excavated in the state of Paraíba, Brazil, by Heitor Dimas Barbosa in 1989.

The stone was named after its origin, Paraiba, and its vivid blue-green color immediately caused a sensation in the gemstone world at the time. In the same year, at the Toussaint Jewelry Show, Paraiba tourmalines started at $100-200 per carat and within a week had risen to $2000 per carat. It is very expensive and scarce and in extremely large demands.

Green and yellow tourmalines are very common and are therefore less valuable than blue and red ones. Green tourmalines are mostly produced in Brazil, Tanzania and Namibia, while yellow ones are found in Sri Lanka.

Green tourmaline represents freshness, health, and hope. It is a symbol of life. It has a sense of safety, calm, and comfort. It is like when you see trees and green leaves in spring and you get a sense of rebirth. Green tourmaline is also a gem that attracts wealth.

The purple tourmaline, also called Siberite, is mysterious, noble, and elegant, representing an extraordinary status. It combines both the enthusiasm of red and the calmness of blue, and is often used for noble and religious occasions.

Since the purple tourmaline is able to inspire creativity and bring unlimited inspirations, this gemstone is also known as the stone of Inspiration.

Darker in color, rich in magnesium, brown tourmalines are mostly produced in Sri Lanka, North America, Brazil and Australia. The English name for brown tourmaline comes from the Drewe region of Austria.

Places of origin: Brazil, US, Rusia, Madagascar and Sri Lanka

Brazil is the world’s best source of high quality tourmaline stones, production sites mainly in Minas Grasse. The tourmaline crystals produced here are really colorful. So far, more than twenty kinds of colors have been discovered, including almost all of the possible colors of tourmaline.

Red and green tourmalines are  Brazil’s best-selling products. They are the country’s main mineral resources and are mostly mined in the rich pegmatite veins in this region.

Among all the Brazilian mining sites, Paraiba state produces a tourmaline with a special green-blue tone. It is very expensive and scarce and in extremely large demands. It is therefore named the Paraiba tourmaline.

Siberia in Russia, Madagascar, Sri Lanka, and Myanmar also have tourmalines, but the quality is not as good as those of Brazil’s.

China’s tourmaline production locations are mainly concentrated in the Altay region of Xinjiang Province and Yunnan, where there exists an abundant amount of mines for quality tourmalines. Tourmalines in Xinjiang have bright and vivid colors, mostly red, green, blue and multi-colored ones. Crystals are large and the quality is relatively good.

Alternatively, if you want to buy high end tourmaline jewelry ranging from $100-$2000, you can check Farfetch. They have luxury brands like Gucci, Prada, Boucheron, Cartier, Chopard, David Morris, De Beers as well as designer brands that are unique and less well-known. You can also have all the products delivered to your home.

1. Bury or soak in kosher salt

The standard way to cleanse and purify a tourmaline crystal is to use kosher salt, since it does not contain common additives such as iodine.

How do we do it? If you use large grains of kosher salt, then simply put the salt on a plate or dish and then bury the stone within the salt for about 24 hours. Reminder, it can be longer than 24 hours, but not shorter. This is very effective and can last up to 3 months with a single purification, also called 100-day purification.

2. Place it on a crystal cluster

Tourmaline and its energy come from nature, so we can also use natural methods to help cleanse and purify the stone. Place the stone in a flowing stream or river and rinse it with water for 20 minutes before drying it. If this is not possible, buy a bottle of mineral water and soak the crystal in it for 24 hours. This helps to remove the negative energy.

The first trick is to put tourmaline jewelry in the box separately from others when you don’t wear them. Do not let your jewelry rub and impact one another to avoid unnecessary damage.

Secondly, since the hardness of tourmaline is relatively high, i.e. 7-8, the stone itself is relatively brittle and fragile, and is afraid of falling and clash. Therefore, unless you are wearing a totally pure and flawless tourmaline, try not to wear during exercise, so as to avoid breaking the gemstone.

Thirdly, it is a good habit to regularly check and repair your tourmaline jewelry in time. Go to a professional on a periodic basis to check your jewelry so to resolve any issues.

Thank you for reading this article, I hope it helps you get the information needed. Feel to share your thoughts below or check other articles on gemstones that we have published: The amethyst stone and its properties, colors, meanings.

What is carnelian? Properties, meaning, color, healing properties and jewelry