Largest ruby in the world? 125West? Neelanjali? Here is a complete list of Top 10.

People born in August are unique in the fact that they have three August birthstones: peridot, spinel, and sardonyx.

The first is a unique, bright green gemstone formed under extreme conditions, often brought to Earth by meteorites that have traveled hundreds of thousands of miles through space. The second one, spinel is a deep red gem that was popular among ancient kings and emperors due to the fact it looks similar to rubies. Sardonyx, however, was the original birthstone for August and has a history dating back over 4,000 years!

Keep reading to learn more about these gorgeous gemstones and find the perfect gift for loved ones born in August.

History: purity and dedication to piousness, wise and fair

The word “peridot” derives from the Arabic “faridat” which means gem. This gem was highly prized among ancient cultures, often appearing in churches of Medieval Europe, in Priestly jewelry, and as a talisman with special protective powers. 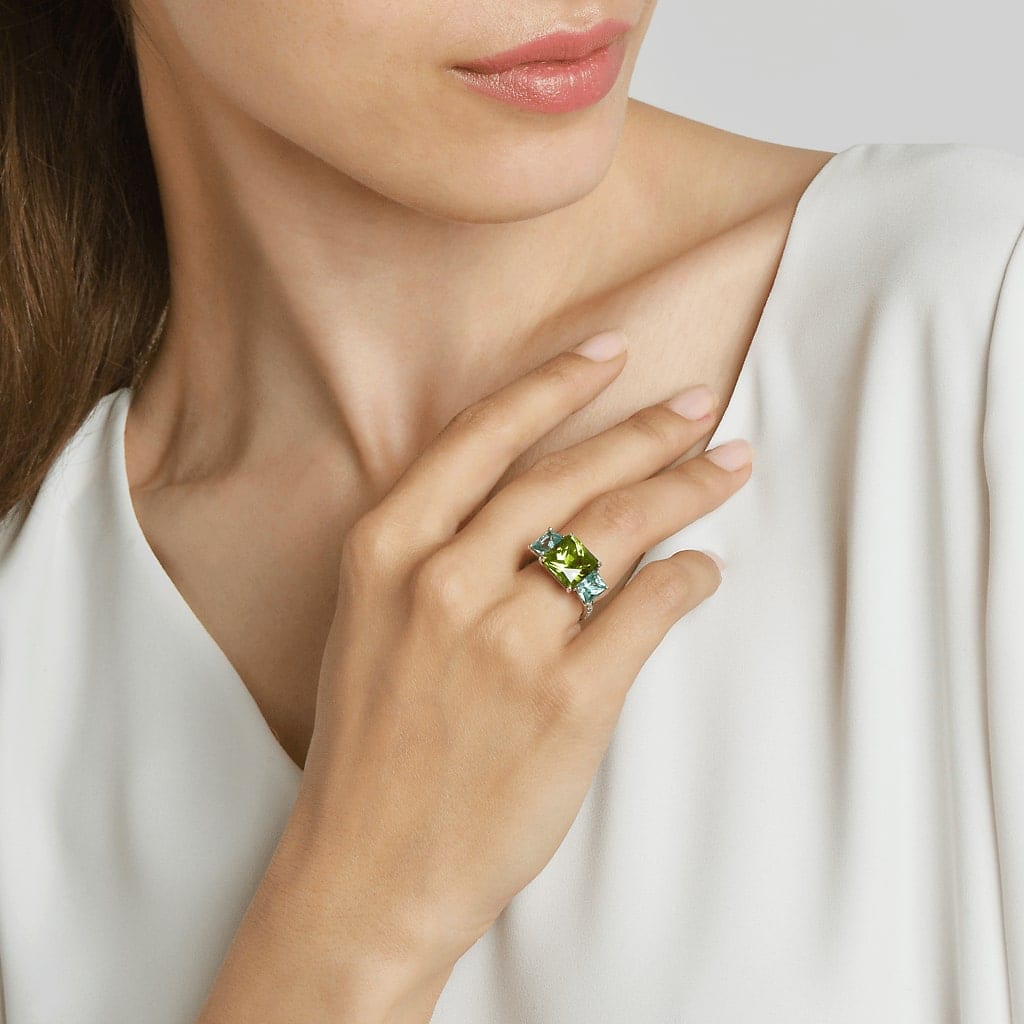 The ancient Romans even called it the “evening emerald” as its color remained bright and lustrous throughout the darkest of nights.

Today, many religious leaders wear signets of this gem to represent their purity and dedication to piousness.

This precious gem was thought to shield its owner from “terrors of the night” and expand ones ability to openly receive blessings from the Universe. Since this beautiful green gem was mainly worn by people in leadership positions, it is often indicative of people who were wise and fair.

This gem is a variety of a mineral called olivine, having a chemical composition made up of iron and magnesium. The iron in this mineral is responsible for the rich, green color of peridots.

Although most specimens are green, this gem can be found in shades anywhere between clear, pale yellow, and dark, emerald green. Peridots are famous for their vitreous luster, meaning they give off a “glass-like” shine. In addition, they are a fairly hard gem, averaging about 6.5-7 on Mohs’ Scale. 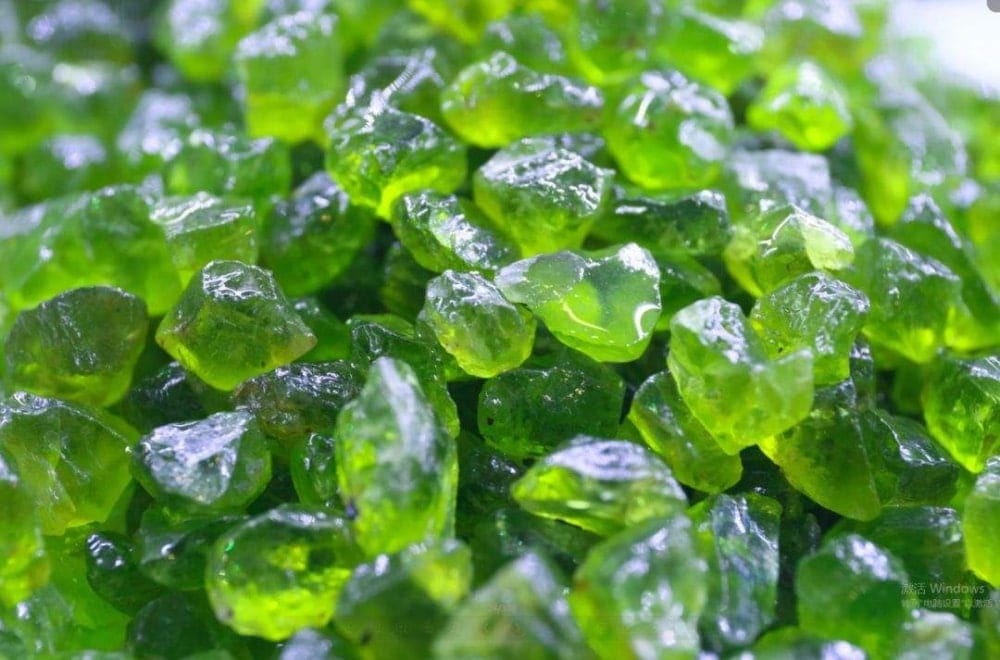 Peridots are a variety of olivine and are considered a semi-precious metal. They can be found in the Canary Islands, China, Brazil, Norway, Hawaii, Myanmar, Australia, Pakistan, and South Africa, as well as several other places.

Smaller peridots (under 5 carats) can be found in the southwestern United States, although they are mainly used for production purposes. Several other exotic areas are known for the gem, as well. If you take a trip to Peridot Beach, Hawaii, the sands shimmers a gorgeous green in the sun, indicative of the gem.

The finest specimens of this gem can be found in many prestigious museums around the world. The most highly desirable gemstones are found in dangerous locales with ominous names such as “Island of Death” and “Snake Island.” With their supreme transparency and rich, green color, it is obvious why these quality gems are reserved for the finest institutions.

The value of this gemstone can vary greatly, with smaller specimens going for as low as $30.00 USD. However, depending on the quality of the gem and where it was sourced from, prices can go into the thousands of dollars.

This fiery green gem has been valued for its beauty by ancient and modern civilizations alike, still remaining a popular choice among jewelry enthusiasts. It is even thought that Cleopatra’s famous “emerald collection” was in fact not emerald at all, but the peridot stone. 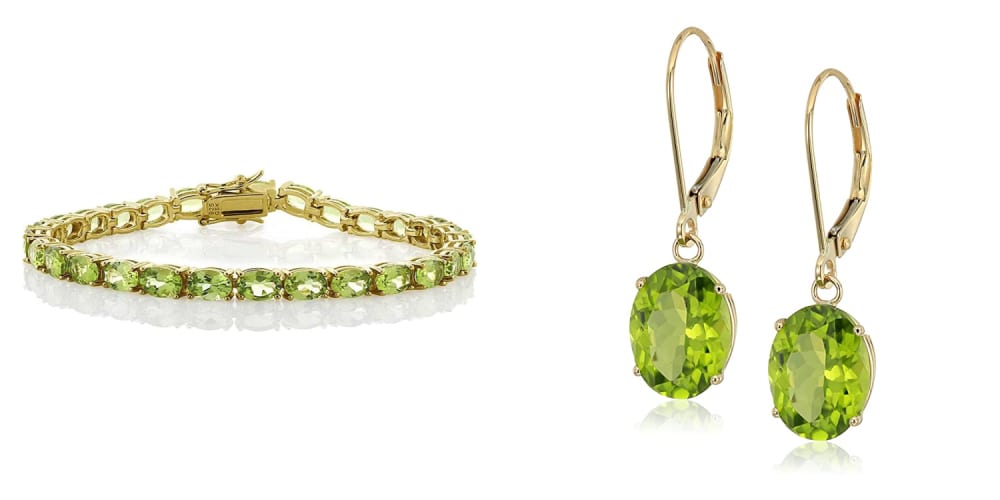 Meanings of the peridot stone: a crystal of positive power

It has long been thought that this gem is a crystal of positive power. It is a talisman for honoring love, the source of abundance, and can expand one’s ability to receive from energy the Universe.

This popular gem is often used in fine jewelry, with popular options being necklaces and rings. When used with the right intentions, it can also be used as a talisman to protect its owner from the “terrors of the night.”

Peridots have been famous throughout history, often used to decorate places of religious practice. For example, the famous “Three Holy Kings Shrine” in Germany’s Cologne Cathedral is thought to be decorated in over 200 carats of some of the world’s finest peridots!

In addition, the largest specimen in the world, weighing over 311.8 carats, can be found at the Smithsonian Museum in Washington, D.C.

If you want your gemstone to look its best, it is imperative that you care for it and maintain it properly. When cleaning your specimen, it is important to use a soft, non abrasive brush and mild soap or water. Standard jewelry cleaner will also do the trick, just make sure to thoroughly rinse and dry your piece before donning it again.

One important thing to note about peridots is that they should never be cleaned using steam or an ultrasonic machine, as they are sensitive to sudden temperature changes. 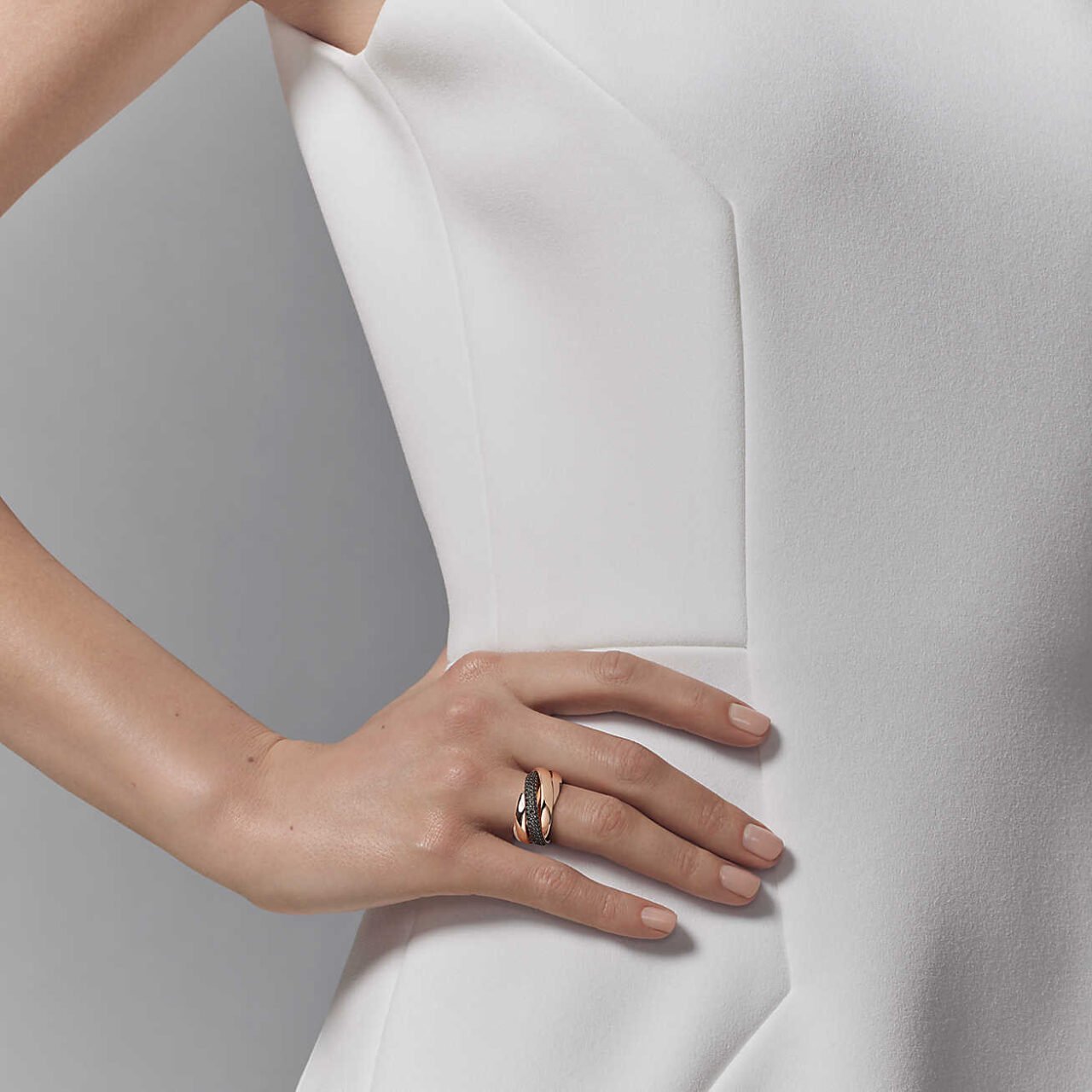 History: close ties to ancient civilizations throughout the world

Spinel is a unique gemstone with ties to ancient civilizations throughout the world. Due to its similar look to rubies, it was long mistaken as such by emperors and monarchs. Due to this fact, this gemstone was often passed through many hands as spoils of war.

This gemstone is unique in the fact that it is singly refractive, meaning that it exhibits the same crystal properties in all directions. 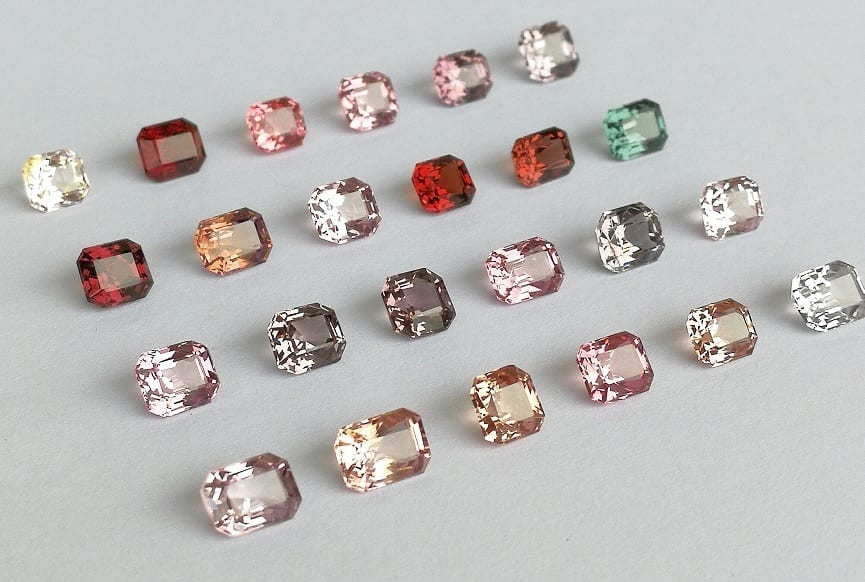 It offers a wide range of hues, from an intense “firetruck” red to vibrant pinks, blues, purples, oranges, and greens. The color of this stone is determined by its trace minerals, often a mixture of iron, chromium, and cobalt.

Spinels are fairly hard, with this August birthstone registering as an 8.0 on the Mohs’ Scale.

This “rainbow gem” is most commonly found in the gemstone ridden gravel of Sri Lanka, as well as in the limestone of Afghanistan, Myanmar, Cambodia, Nepal and Tajikistan. 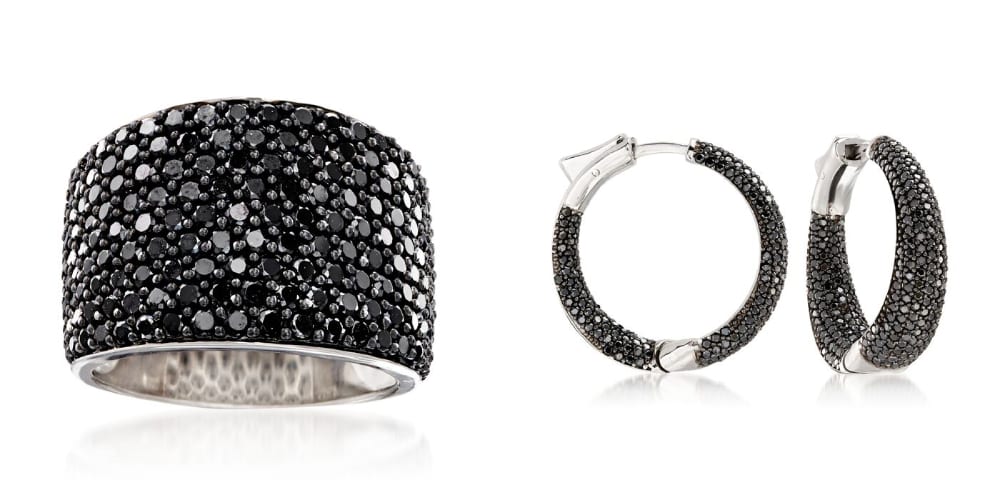 Due to its varying colors, this gemstone makes a beautiful addition to any collection and can suit almost all tastes. 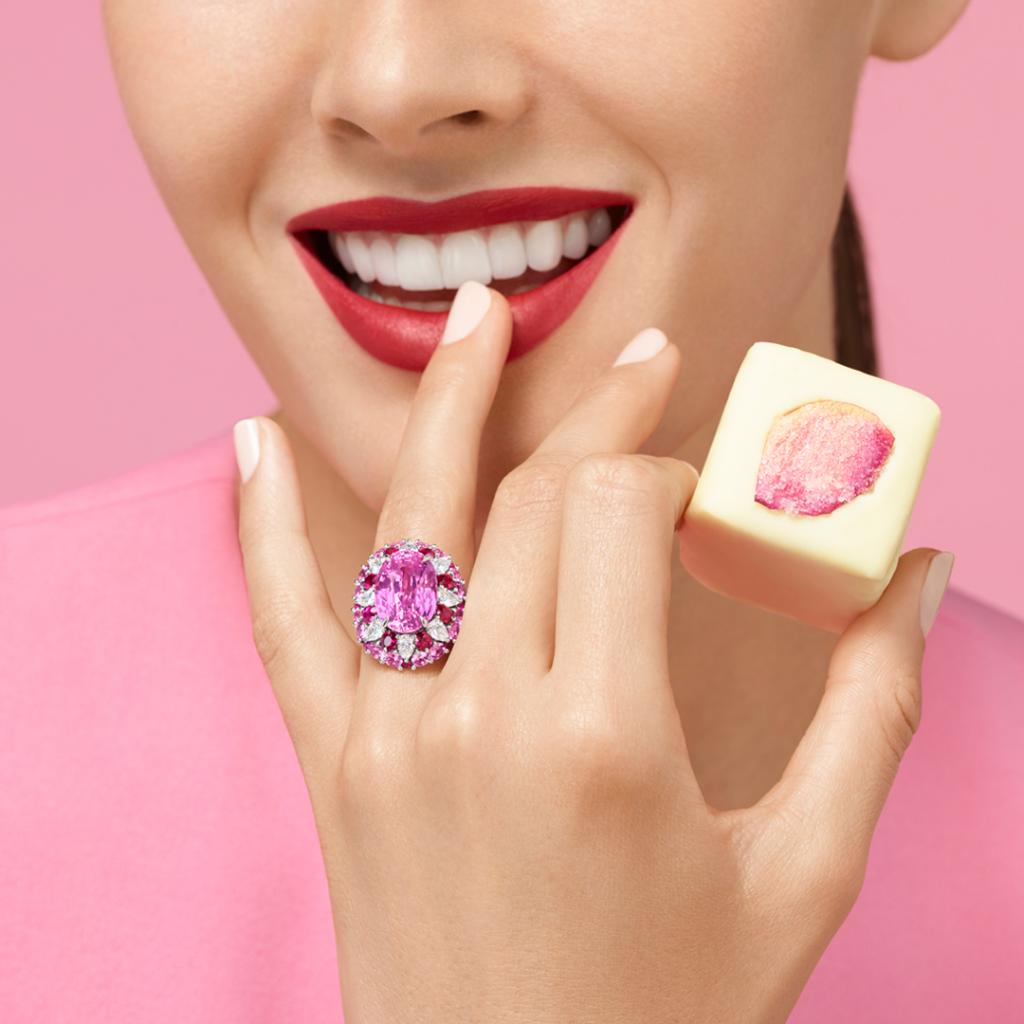 Meanings: a stone of hope and revitalization

Spinel is considered as a stone of hope and revitalization. Since it comes in a variety of colors, it is thought to revitalize every chakra. Many people wear pendants or rings of this gemstone in order to pull themselves out of negative thoughts, regain a sense of energy, and find new enthusiasm for life.

It is thought to widen its wearers’ perspectives by bringing fresh energy to the mind, body, and spirit. 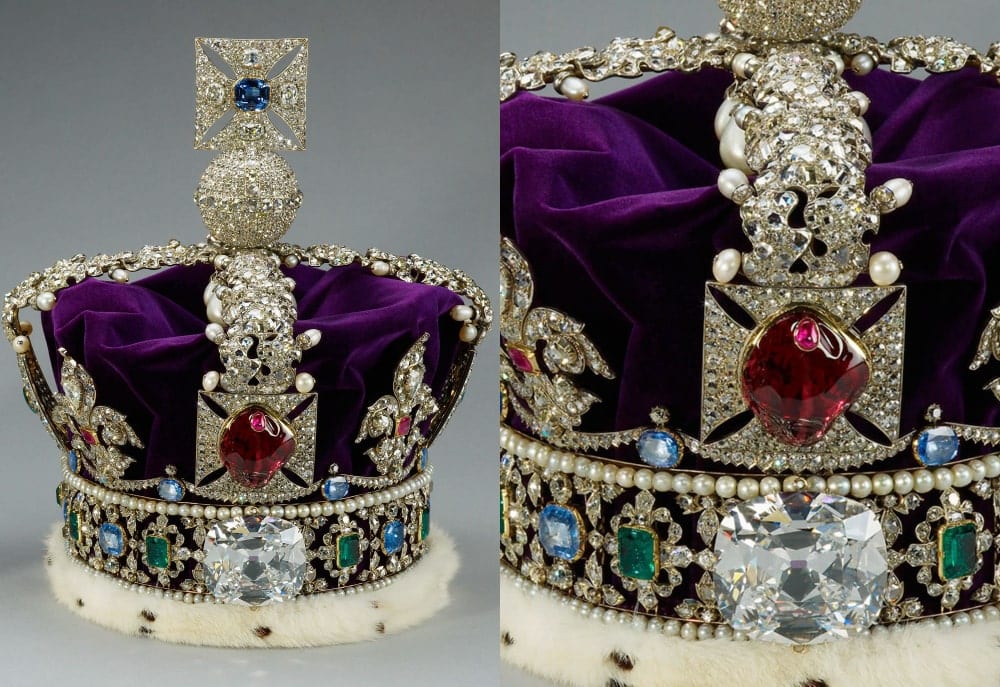 One of the most famous Spinel specimens is the “Black Prince’s ruby.” This gemstoe is set in England’s Imperial State Crown and is displayed for viewing in the Tower of London.

It is thought that this specimen was mined in the mountains of Afghanistan and appeared in historical records from fourteenth century Spain. The stone was later acquired by Prince Edward of Wales as a spoil of war.

This gem is fairly hard, however, it should still be treated with care. It should be cleaned with warm water and a mild soap to keep it in its best condition. It is important to not expose this gemstone to hot water or direct sunlight as heat can alter its signature color.

History: one of the most holy stones

Sardonyx is believed to be one of the most holy stones, often appearing in breastplates of high priests and priestesses. 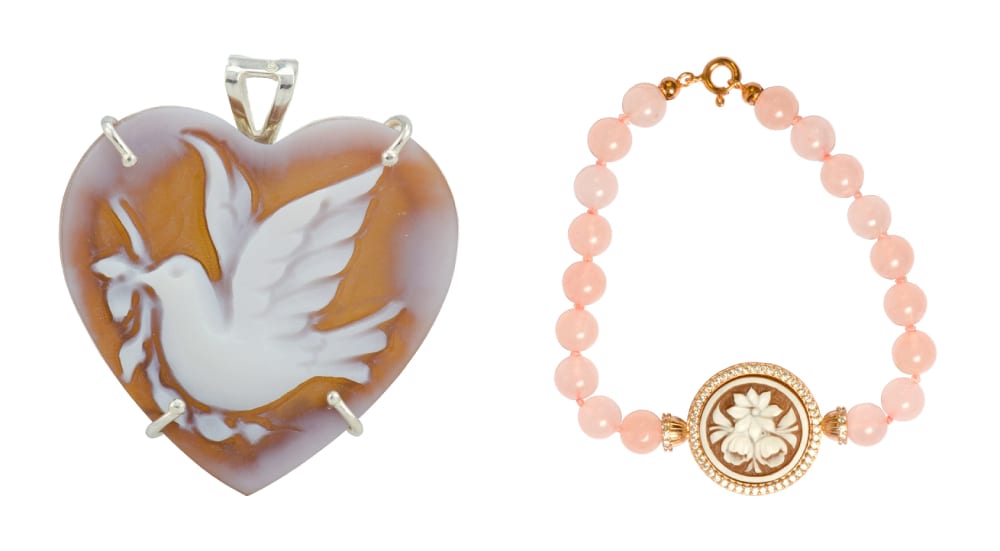 High ranking roman soldiers even wore rings and pendants made of the gem, often carved with the image of Mars. These were worn as protective talismans during battle and times of national distress.

Roman women, however, wore pendants carved with the image of Venus, the goddess of love, in hopes of harnessing her powers.

Other high ranking officials used carved Sardonyx to imprint wax emblems on official documents. This was done because they noticed the hot wax used for seals did not stick to the stone.

This unique gem can appear in colors anywhere from dark orange or red to black. It is formed through the layering of sard and onyx over thousands of years, from which it gets its unique name. This stone can appear with defined bands or even as a mix of different colors.

This fiery gemstone is known for its vitreous or “glass-like” luster and can be classified between hardnesses of 6.5-7.0 on the Mohs’ Scale. 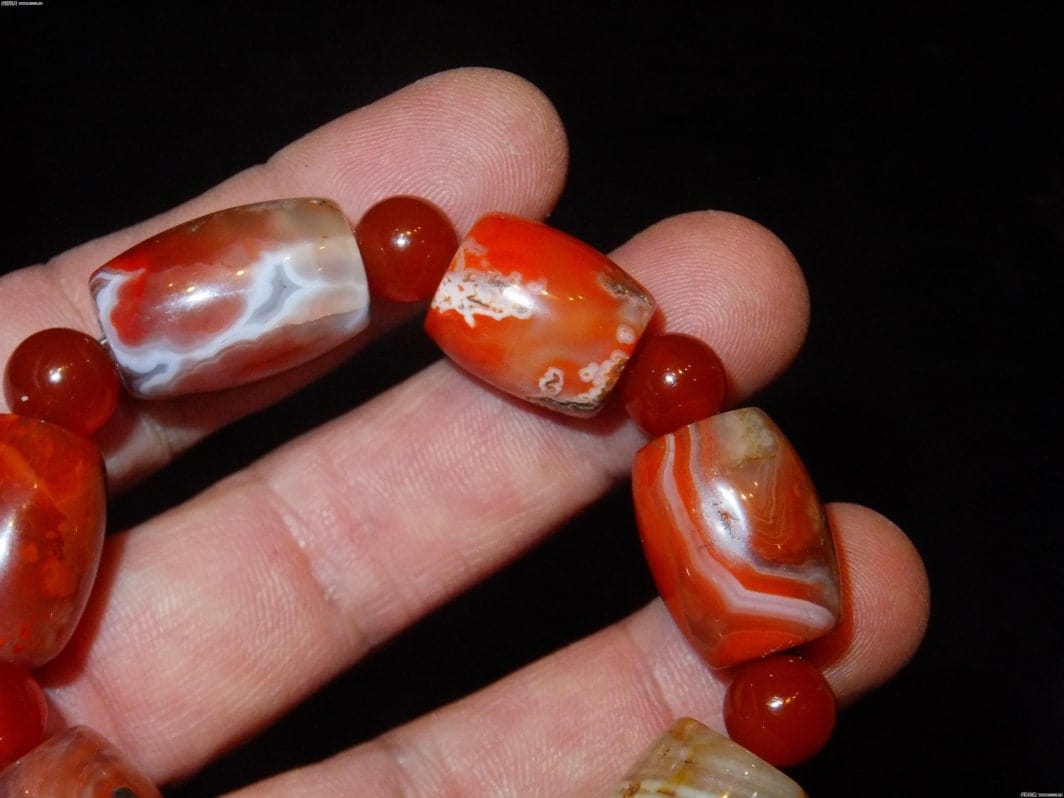 The finest specimens of this eye-catching gem can be found in India, where the contrast between the distinctive bands of this gem are notably sharp. Other sources also include Germany, Brazil, Madagascar, and Uruguay.

This gem is readily found throughout the world, making it readily available and fairly inexpensive. Some of these stones are even stained with an iron oxide pigment or nitric acid, used to enhance its color. Commonly, this stone is cut into a cabochon shape and is used in cameos, intaglios, and broaches.

Even though it is extremely beautiful, this gemstone is readily available and quite inexpensive. It makes an affordable addition to anyone’s collection, especially when its been polished.

The signature “tiger-like” banding is sure to be an eye-catching conversation starter. According to ancient folklore, placing a gemstone at each corner of your house is thought to ward off evil spirits.

Meanings of sardonyx: a stone of protection and strength

Sardonyxes have been used as a stone of protection and strength since ancient times, leading to it being associated with courage, happiness, and clear communication. It is also thought to bring stability to marriage and lasting happiness to those who don it.

This gem is especially famous for its use in cameos, or a carving in relief on a background of contrasting color. Some depict famous portraits, religious figures, scenes from Greek mythology, and more. These cameos can be found in museums all over the world.

Care and Maintenance of sardonyx

Although this gem is fairly hard, it can still easily be scratched or disfigured without proper care. When cleaning it, it is vital to use a soft brush and mild soap. It is also important to rinse and dry the stone well before use after cleaning.

When not in use, it is important to store it in a fabric-lined box or soft cloth out of direct sunlight. Direct, prolonged exposure to sunlight can fade the bright color profile of this stone, so keep it in the shade as much as possible.

In conclusion, these three gemstones are amazing additions to any collection and make for great gifts. These august birthstones have been prized since ancient times, and remain a luxury in modern times.

If you are lucky enough to get your hands on one of these fine specimens, you absolutely will not regret it. Hopefully, this article has given you the insight you need to find the perfect gift for an August-born loved one.

Thank you for reading this article about August birthstones, I hope it helps you get the information needed. Feel to share your thoughts below or check other articles on birthstones by month that we have published.

Largest ruby in the world? 125West? Neelanjali? Here is a complete list of Top 10.