Pearl jewelry: For elegant and romantic women like you

“What is my birthstone” is a common internet search. The list of birthstones by month was officially composed by the Jewelers of America in 1912. March babies, you’re in luck–you get two stunning monthly birthstones. The aquamarine and bloodstone offset each other strikingly.

If you’re a March Pisces (born before March 21), you might be drawn to the luminous lagoon-blue aquamarine, the stone of sailors and sea gods. The fiery bloodstone, with its mythos of passion and war, suits a March Aries (born March 21-31). Or perhaps, like March weather, you embrace the contradictions.

Each birthstone for March has a rich history that touches many cultures. They had practical uses; aquamarine was clear enough for Medieval spectacles, while the blood stone was crushed into a powdered aphrodisiac. But they were also revered for their supposed mystic powers. Like the month of March itself, the March birthstone is a fascinating study of contrasts.

Aquamarine: The jewel of the sea

The word aquamarine comes from the Latin aqua marina, meaning seawater. Ancient Greek and Roman sailors wore aquamarine amulets at sea. They believed that the “mermaid stone,” with its aquatic blue-green color, calmed the waves and ensured safe passage.

When the Romans ruled Egypt they imported the gem from India. Archaeologists have found aquamarine stones inside Egyptian tombs and burial sites.

Roman philosopher Pliny the Elder claimed that staring at an aquamarine would cure ailments of the eye. During the Middle Ages, fortune tellers gazed into the translucent stone to “see” beyond the ordinary realm.

Despite its storied history, the aquamarine was not officially documented until 1723, when a huge deposit was unearthed in the mountains of Siberia.

Like emerald, aquamarine is a variety of the mineral beryl. It naturally forms in hexagonal crystals that can be up to 1 meter long.

Aquamarine is a dichroic gem, meaning that it can have two different colors–blue or clear—depending on the angle. It’s a hard and durable stone with a radiant glassy shine.

Aquamarine stones are found inside granite pegmatites–clusters of interlocked crystals.

Most of the world’s aquamarine comes from Marambaia, a region in the Minas Gerais state of Brazil. The stone is also commonly mined in the African nations of Madagascar, Kenya, Tanzania, Mozambique and Nigeria.

The gems are quarried in countries across Asia, from Russia to Myanmar to Sri Lanka. In the U.S., crystals have been found in the Rocky Mountains, particularly atop Colorado’s Mount Antero.

Aquamarine gems are valued based on their clarity and intensity of color. Raw stones are heat treated to intensify the blue hue.

Because they often come in large sizes, these gems’ value does not increase progressively according to their weight. However, larger aquamarines–those above 5 carats–typically display a more vivid blue, which boosts their value.

Aquamarine symbolizes truth, joy and eternal youth. As an amulet, it is thought to protect its wearer and promote courage and verbal self-expression.

Some believe that this March birthstone has soothing, refreshing properties. Holistic healers have used it as an all-purpose healing stone.

In Western folklore, the gem also heals relationships. Legend has it that a frog carved on an aquamarine stone can turn enemies into friends.

It is also said that aquamarine absorbs the spirit of young love. So it’s a popular choice for engagement rings and wedding gifts.

In 1953, the president of Brazil gave Queen Elizabeth II an aquamarine necklace and earrings as coronation presents from the Brazilian people. The gift was not unprecedented. In 1936, he had bequeathed First Lady Eleanor Roosevelt with a rectangular step cut aquamarine that weighed more than 1,000 carats.

Some time in the 1980s, Brazilian miners excavated the world’s largest aquamarine. Before it was cut, the stone was more than 3 feet long and weighed 100 pounds. The “Dom Pedro” aquamarine, named for the historic Brazilian emperors, is currently on display at the Museum of Natural History.

With a ranking of 8 on the Mohs hardness scale, aquamarine is quite resilient. The gem does not require much upkeep.

Owners should consult a jeweler before attempting to mechanically clean an aquamarine. In the meantime, you can use warm water and a gentle detergent on the gem.

Do You Also Know?

One of the world’s first gemstones

Bloodstone has been present in human society since the Stone Age, when people carved arrowheads and other tools from the mineral. From there, we have followed the evocative stone through the centuries.

The bloodstone seals of Babylon gave way to talismans worn by the first Olympic athletes in Greece. Then came ancient Roman bloodstone pendants and crucifix gems treasured by early Christians. In the 16th century, the legendary Miseroni family of gem-cutters produced magnificent bloodstone bowls and goblets.

Both practical and symbolic, the bloodstone has captured the human imagination for ages. Historians consider it to be one of the world’s first gemstones.

Bloodstone is a fusion of different quartz varieties, typically opaque jasper and translucent chalcedony. It’s cryptocrystalline, meaning that it’s made of microscopic crystals.

The stone has a cool dark green color that is splattered with bright red markings. These “drops of blood” are caused by iron oxide or red jasper inclusions in the stone.

Bloodstone occurs in a trigonal crystal shape. It has a glassy or waxy luster. With a Mohs hardness rating of 6.5 to 7, this stone is fairly scratch resistant.

What are Sagittarius birthstones and what do they mean? 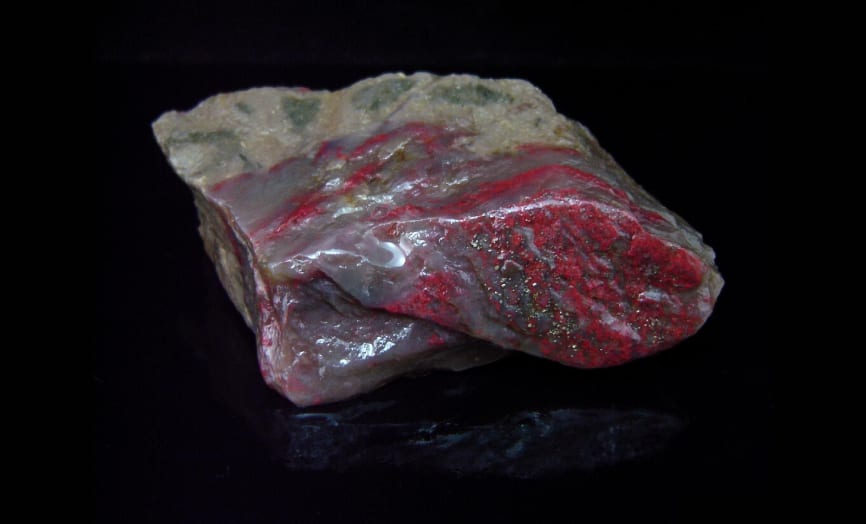 Bloodstone forms at shallow depths, in places where silica-rich groundwater has collected within cavities in igneous rock. It is often found in creek and river beds.

India is the original source of the bloodstone and remains the largest producer of the mineral. But there are deposits all around the world, in places like Australia, Brazil, China, Germany and even the USA.

Scotland’s Isle of Rum is a major site of bloodstone artifacts from the Mesolithic Era.

Bloodstones are valued for their cut and setting. They’re often fashioned into cabochons, oval jewels with flat bottoms. A high quality cut shows off the bloodstone’s dramatic color contrast.

The bloodstone has always been steeped in mythology. It was originally called heliotrope, from Greek words meaning “sun turn.” Ancient Greeks believed that the mineral could change the color of the sun’s rays.

Roman soldiers thought that it could staunch the flow of blood. Mystics suggested that bloodstone could be used to control the weather and the eclipses. And later, Christians imagined that the scarlet spots on the stone were drops of Jesus’ blood.

Some healers say that it promotes healthy circulation and a robust immune system.

This durable March birthstone does not require any special care. It can tolerate mechanical cleaning. You can also simply wash it with warm, soapy water and a soft brush.

Do You Also Know?

March birthstones as two faces of the month

When researching birthstones by month, you might be surprised to learn that March has two. Clear and opaque, light and dark, the aquamarine and bloodstone are as different as two gems can be.

Aquamarine dazzles in silver or white gold settings. On a ring, it can be the mystical centerpiece amidst a field of smaller white diamonds. “The jewel of the sea” is also an attractive choice for drop earrings–especially because they’ll actually resemble water droplets.

The bloodstone, when cut in a broad, simple shape, radiates ancient power. It pops appealingly against a gold or copper setting. It’s a perfect choice for an eye-catching unisex crystal pendant.

Everyone should own at least one piece that represents their birth month. March’s gems reflect the two faces of the month, a balance of two seasons. Whichever birthstone for March you prefer, you can peruse many gorgeous jewelry options for aquamarines and bloodstones.

Thank you for reading this article about March birthstones, I hope it helps you get the information needed. Feel to share your thoughts below or check other articles on birthstones that we have published.

Pink gemstones: Who would be your valentine?

Pearl jewelry: For elegant and romantic women like you